This article is about the relationship between Quack Quack and Eugly. 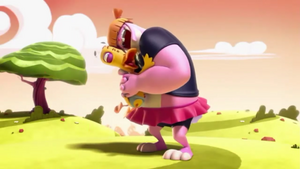 Quack Quack and Eugly are boyfriend and girlfriend. They fell in love the moment they first laid eyes on each other in "Let's Play Truth or Dare".

Quack Quack is the only person in the cast who is nice to Eugly and doesn't make fun of or abuse her. He is often seen on dates with her or talking with her. The only time he ever gets angry at her is in "Let's Play Party", where he gets angry with her due to one of Mr. Cat's schemes making it look as though she was cheating on him.

Eugly is very protective of Quack Quack and will beat up anyone who dares to hurt him in front of her (which is usually Mr. Cat). She is always happy to be with him, except at the end of "Let's Play Truth or Dare" when she punches him because Kaeloo thought they were in love (even though they actually were).

In season 4, their relationship encounters problems. Eugly wants Quack Quack to give up yogurt but he refuses to, which causes friction between them. Quack Quack occasionally does insensitive things without thinking, which greatly upsets Eugly, but Mr. Cat encourages Quack Quack not to apologize because he thinks Quack Quack didn't do anything wrong and Eugly should "accept him as he is". However, they still love and care for each other.