Next door to the main four

Being reminded of her asymmetrical ears
Stereotypes
Ugly things
Squirrels

The end of the world
Scorpions

Pretty is selfish, obnoxious, egocentric and narcissistic. She is obsessed with fashion, beauty and maintaining a perfect body. She is also extremely rich, so she always has trendy items.

Pretty is madly in love with Mr. Cat, but the feeling is far from mutual. She hates Stumpy, Quack Quack and Kaeloo and frequently argues with them, although she is occasionally nice to Kaeloo. Almost the entire cast sees her as very irritating and utterly despise her.

She constantly criticizes her twin sister, Eugly, about her weight and her looks and treats her like a slave, but she is sometimes nice to her and gets angry if others insult her sister.

Pretty will stop at nothing to get what she wants. In "What if We Played at Riding Ponies?" she forcefully took Kaeloo's horse because she wanted it for herself. In "Let's Play Castaways" she wanted to give mouth-to-mouth resuscitation to Mr. Cat, and when he said he was perfectly fine, she knocked him out with a baseball bat to prove that he "needed" it. In "Let's Play I Like You", just for the sake of getting more likes on Fakebook, she posts humiliating pictures of the main four online.

"Let's Play Jetset vs. Jahjah" shows a much nicer side of Pretty. In this episode, she is genuinely reluctant to bully Kaeloo, but does so anyway because other people who don't like Kaeloo are watching her. She also quietly apologizes to her while the other people aren't looking.

Pretty is often shown to have a temper that could make even Mr. Cat look patient in comparison; the slightest problem will make her start screaming at (and sometimes even physically abusing) whoever caused it.

She is able to easily come up with schemes to bring down anyone who opposes her. The episode "Let's Play Corsair Queen" shows that she also has a high level of athletic prowess, and she is an excellent fighter and athlete.

Pretty is a pink rabbit. She has a dark pink heart-shaped nose, green eyes, and a large front tooth. She ties her inequal-length ears together with a pink bow. She typically wears a red tank top with a yellow star on it, a red skirt and black leggings. On her feet, she wears black sandals with a red strap across the middle. She wears a gray band on one of her arms, and her fingers have pink nail polish on them.

Pretty is the most prominently featured of the three secondary characters. She is usually portrayed as an antagonist. Most of her roles in the show involve her insulting, bullying and arguing with the rest of the characters.

Stumpy shouldn't have done that

We could be close friends 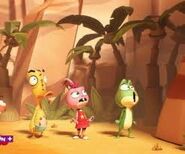 What happens if you eat at the McDaube

The world is ending!