Building robots and other machines, baseball

In his own words, Olaf hates everybody. He dreams of taking over the world and covering it in ice and snow. He also appears to be quite selfish, as in the episode "Let's Play Frosted Christmas" he kidnaps Quack Quack to use his powers to make a snow machine, and steals the treasure in "Let's Play Pirates 2: Revenge of the Emperor". Olaf is married to an ice cube named Olga.

Olaf has a terrible sense of humor. One of his "jokes" is tricking the main four into believing that they've been fired from the show, causing them panic and misery, and then revealing at the end that they never were fired.

He gets very angry when somebody calls him an auk instead of an emperor penguin (which the other characters do all the time), or when people make fun of him for being short.

Like most inhabitants of Smileyland, Olaf will not hesitate to cheat to get what he wants.

Despite being able to build robots, Olaf can be quite stupid at times, for example blatantly refusing to believe that the world was ending because he thought he was the only one who could say when the world would end.

Even though Olaf sees the others as being beneath him, he enjoys socializing with them occasionally, though this is usually done with the intent to observe rather than participate.

He is a genius who has built several inventions and robots, including Serguei. In "Let's Play Pirates 2: Revenge of the Emperor", he turns Stumpy into a cyborg. In "Let's Play Frosted Christmas", it is revealed that he has a whole army of mini-robots that look exactly like Serguei.

He is shown in several episodes to be a terrible singer.

Olaf is a blue emperor penguin. He has very large eyebrows and a beak with several sharp teeth. He is noticeably shorter than the other characters.

Olaf was born in the pack ice of Smileyland, where he found Olga. Other penguins living in the ice banned him when he wanted to marry Olga. In the episode "Let's Play Frosted Christmas", he kidnaps Quack Quack to finish his machine that makes snow so he could take over the world. 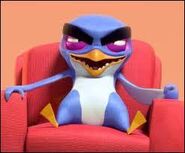 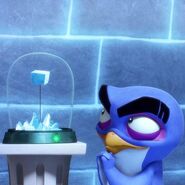