Mr. Cat the cat (known as Mr Chat in the French dub) is one of the show's main characters, serving as both the deuteragonist and the main antagonist.

Mr. Cat is an orange cat with brown stripes on some parts of his body. He has red eyes. Like a real cat, he has whiskers and sharp canine teeth, and retractable claws, which are black when they're out. He wears a pair of dark purple fingerless gloves, like Stumpy's.

In "Let's Play Quantum Mechanics", Mr. Cat appears in the form of a human. His human form is Caucasian with red hair. He wears an unzipped orange jacket with brown stripes, similar to how his cat form has orange fur with brown stripes. Under the jacket, he wears a red shirt with a picture of a psychopathic smiling cat on it. He wears the same fingerless gloves as his cat form. He also wears loose-fitting khaki pants with a black belt, and dark brown boots. 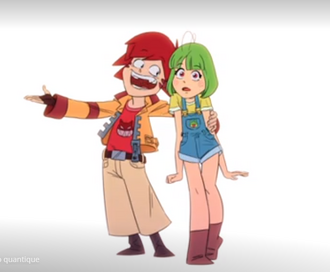 Aptly described by Kaeloo as "evil, sadistic, cruel, hypocritical, egoistic, and psychopathic" (and taking it as a compliment), he always wants to win, whatever the means and is even willing to cheat to do so. He especially enjoys torturing Quack Quack, which upsets Kaeloo and is the usual cause of her transformation into Bad Kaeloo.

Mr. Cat has proven to be incredibly selfish and manipulative. He will do anything to get what he wants, even if it means hurting other people. His manipulative schemes include Quack Quack into breaking up with Eugly as part of an elaborate plan to get Kaeloo to kiss him on Valentine's Day, and threatening to commit suicide if his friends didn't buy him an expensive spa package.

The series' pilot shows that he has a crush on Kaeloo, as well as several other episodes; this crush is reciprocated, though it is not clear if either one of them is aware of the mutual nature of their feelings.

Mr. Cat can be nice sometimes, and he cares about his friends Kaeloo, Stumpy and Quack Quack deep down. If somebody else (such as Olaf or Pretty) messes with his friends, he will attempt to defend them and may even try to do something horrible to the aggressor to avenge them. In "Let's Play Hallo, Hello, Ola" he was extremely guilty when he realized that his actions had probably let down his fans, showing that he also cares about the viewers. He claims to hate having to play games with the others, but he has confessed to the audience that he hates it when the others have fun without him. In the rare event that the others start playing without him, he is utterly infuriated and calls them out for leaving him out.

Mr. Cat strongly believes in the idea of "being yourself" and is generally apathetic towards other people's opinion of him. The sole exception to this rule is Kaeloo; episodes like "Let's Play Tea Party" and "Let's Play the Door" suggest that he is willing to go to extreme lengths to make sure that her view of him is not tarnished in any way.

Despite his mature and adult-like personality, Mr. Cat has often exhibited childlike behavior; he owns a favorite stuffed toy, the missiles in his bazookas have crayon faces drawn on them, and he still believes in fairies.

Mr. Cat is very skilled at many things, though not to the same extent as Quack Quack. He is very smart, as he invented a cloning machine in "Let's Play Detectives", a ratings collecting device in "Let's Play TV News", and is stated to have several other inventions, and is knowledgeable of some of the more complex scientific principles. He is also able to emotionally manipulate the others to some extent. As seen in "Let's Play Small Business" and"Let's Play at Saving Money", he is very good at managing finances. He is also a skilled athlete as shown in "Let's Play Scaredy Cat", where he fought several hordes of zombies by himself, or in "Let's Play the Quest for the Wholly Gruel" where he manages to dodge several falling meteorites and pull Kaeloo out of the path of the meteorites as well while running. 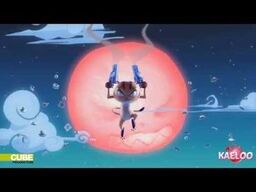 He is very sneaky and can go from place to place without anyone noticing, even without using a cat flap.

He has numerous cat flaps placed around Smileyland, which can serve to teleport to other places (and thus be used to cheat at games) and serve as a habitat as well.

He also has the ability to create numerous clones of himself. It is unknown whether this is because he owns a cloning machine or not.

Being a cat, Mr. Cat also possesses certain unique abilities such as seeing in the dark and predicting the weather.

Mr. Cat was originally from a big city. As a young kitten, he was abused by his family members. Not much is known about his family other than the fact that his father was an alcoholic gangster, his mother yelled at him, and he had two older brothers who would bully him. When he was old enough he ran away from home, to Smileyland, where he expected peace and quiet, but instead got Kaeloo, Stumpy and Quack Quack. "Let's Play Bye Bye, Yoghurt" implies that at least one person he knew died when he was younger.

As a younger child, he attended school with Kaeloo, Stumpy and Quack Quack; it is unknown if they still go to the same school in the present day. At the time, everyone used to call him Mr. Kitten (M. Chaton in the French dub).

In "Let's Play Baby-Sitting", it is mentioned that he was, as a baby, tied up in a sack and thrown into a river and subsequently rescued by a salmon who raised him as her own son. Whether or not this story is true is left unclear.

In "Let's Play Circuses", it is revealed that Mr. Cat used to work in a zoo in Rome, Italy. This detail is exlusive to the English dub.

It is stated in "Let's Play Carrot & Co." that he had at some point in his life been addicted to carrots before he gave them up (however, he is still addicted to smoking and alcohol).

It is hinted in the episode "Let's Play Goodbye, Mr. Cat" that he was the last one of the main four to get to Smileyland, seeing as he knew the least about the planet's rules. It was also hinted at that he is the oldest of the buddies. Mr. Cat is older than Stumpy, who is 10, which means that he is at least 11. It has, however, been confirmed that Kaeloo and Mr. Cat are definitely older than Stumpy and Quack Quack. A few lines in the Pilot suggest that these two might have been adults in the original concept.

Despite, or perhaps because of, Kaeloo's transformations into Bad Kaeloo, Mr. Cat seems to have formed a crush on her. There are hints of this in several episodes, and the feeling may be mutual. In "Let's Play the End of the World", Mr. Cat says that he had a crush on her from the day they first met.

Mr. Cat is the show's primary antagonist, and he sadistically tortures everybody, especially Quack Quack. He is normally the one responsible for Kaeloo's transformations. Several episodes of the show prove that he is in love with Kaeloo and enjoys seeing her transform, which may be his reason for provoking her all the time. In a few episodes, such as "Let's Play Frosted Christmas", he is one of the heroes instead of a villain. In episodes such as "Let's Play Cops and Robbers", Mr. Cat is blamed for crimes he had nothing to do with because everyone believes he would be the most likely to do things like that. When the main four are stuck in a difficult situation that they need to get out of, Mr. Cat is often the one who takes charge and leads them in coming up with a solution.

Mr. Cat is one of the main reasons the show has one of the things it is known for, its ability to get mature content under the radar.

Mr. Cat frequently breaks the fourth wall by speaking directly to the audience.

Over the course of the series, Mr. Cat has committed several crimes, including: