Kaeloo/Mr. Cat Relationship, also known as "Kaelat" by English speaking fans and "Chaka" or "Kaechat" by French speaking fans, is the romantic pairing of Kaeloo and Mr. Cat. 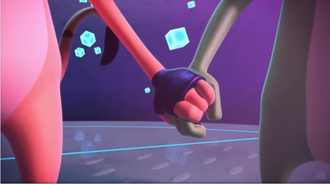 There are several hints in the show that Kaeloo and Mr. Cat have feelings for each other.

Mr. Cat's main reason for provoking Kaeloo to get angry in almost every episode is actually because he has a crush on her, and enjoys seeing her transform.

Interestingly, whether they like each other or not, or who likes who, depends on the episode; in "Let's Play Peace, Man", Mr. Cat was horrified at the prospect of being kissed by Kaeloo, but in "Let's Play House", Kaeloo seemed disgusted by his advances towards her.

A few episodes, such as "Let's Play Baby-Sitting", focus on their relationship. Kaeloo herself seems oblivious to Mr. Cat's feelings for her, but the other characters seem to have figured it out. For example, in the episode "Let's Play Clone Party", when Stumpy tries to impersonate Mr. Cat, he attempts to kiss a picture of Bad Kaeloo, and in "Let's Play Love Diplomat", Pretty asks Kaeloo directly about her and Mr. Cat's relationship. In addition, Stumpy seems to want them to become a couple.

Mr. Cat has a daydream about Kaeloo

"Let's forget everything and leave! Just you and me..." 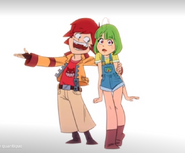 Kaeloo and Mr. Cat as humans 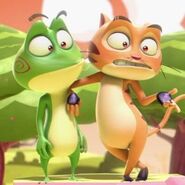 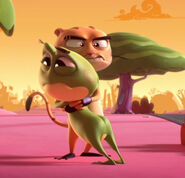